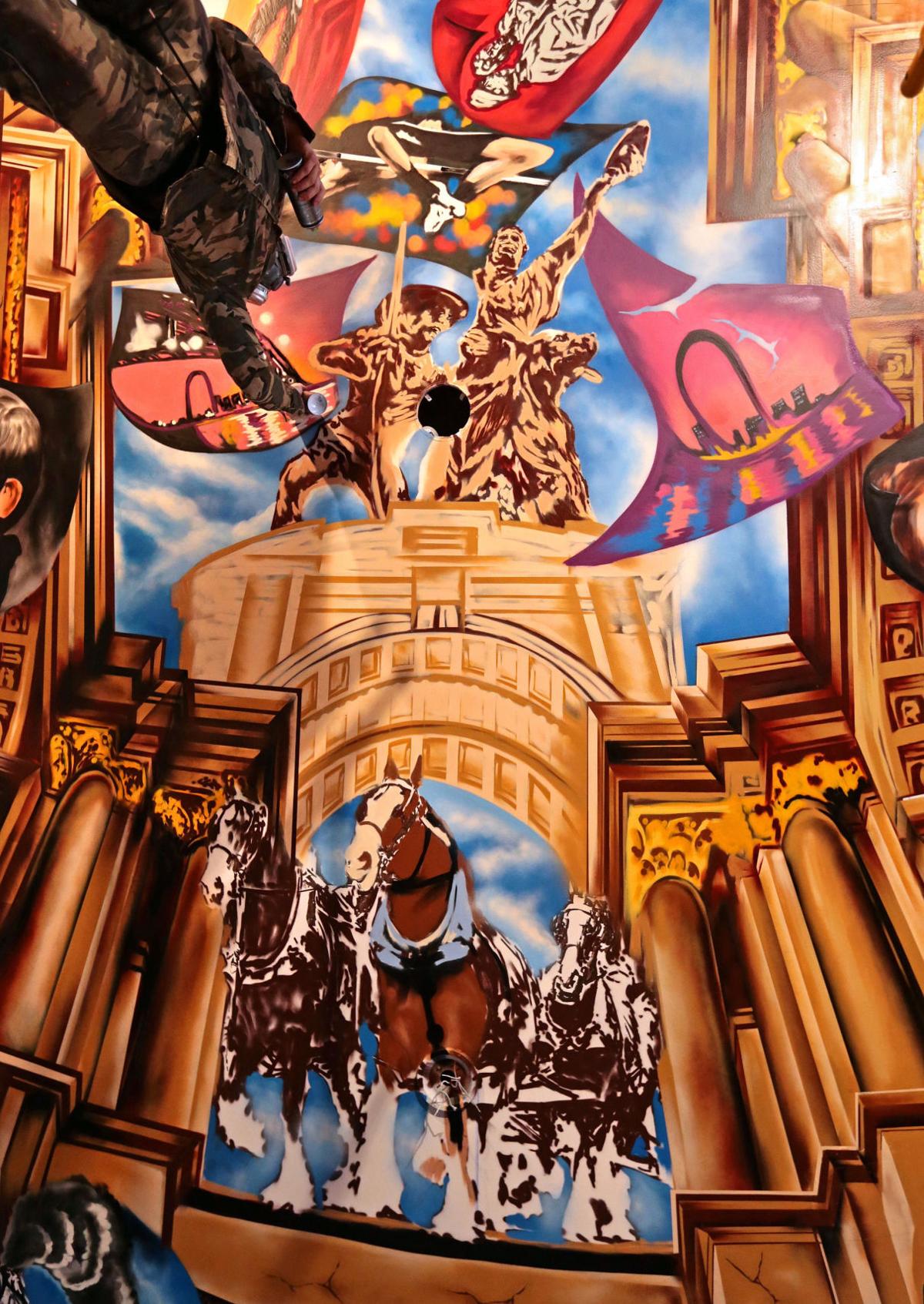 Paco Rosic works on a mural at an upcoming restaurant at 1900 Arsenal St. in St. Louis on Thursday.

ST. LOUIS — Yaksap, the graffiti bandit who has left what many consider infuriating and illegal marks on the sides of numerous St. Louis buildings, could take a valuable lesson from Paco Rosic.

This 37-year-old Bosnian immigrant from Waterloo took his teenage love for graffiti way beyond the delinquent tagging of buildings. He’s become famous for his painstaking and vibrant trompe l’oeil murals created exclusively out of spray paint for both public and private spaces.

Now he’s in town shaking it up with hundreds of cans of paint to create a mural celebrating St. Louis’ history on the ceiling of a soon-to-be-opened restaurant in Benton Park.

Like any hard-core artist, he’s a bit obsessive about it. He’s set up an air mattress in the basement of the building at Arsenal Street and Lemp Avenue so he can paint whenever he pleases. He has a wall in the lower level of the building dedicated to draft renderings along with his massive graffiti lettering for inspiration.

“I cannot stay in a hotel,” he said Thursday while wearing a full camo outfit and a black skull cap striped with bands of glittery silver thread. His necessary air mask hung from scaffolding nearby.

“I get inspired. And when it hits me, it’s usually around two or three in the morning.”

Rosic is a bit of an art folk hero in Waterloo where his family settled in 1997 when he was 18 after years of refugee status to escape persecution in his hometown of Sarajevo. His parents — his mother Catholic and his father Muslim — fled to Germany in 1992 after living in a series of safe houses to survive. Even after the civil war in their native country ended, the family knew there was no chance they would be accepted back because of religious persecution. So when their asylum status was revoked after five years in Germany, the family uprooted again to America. Waterloo, it turns out, was very welcoming to Bosnians.

In Iowa, broke from years of displacement, the family saved every penny from 10 years of working at a Hy-Vee grocery store to buy a dilapidated building and open a restaurant.

The food at Galleria de Paco is fusion, but the ceiling is sky-high Renaissance because Rosic spent five months atop scaffolding to recreate a roughly half-scale version of Michelangelo’s Sistine Chapel ceiling in Krylon spray paint. Media from around the country have highlighted the mural. But even before that attention, Rosic was making a name for himself.

He did his first mural when he was 14 and living in the suburbs of Sarajevo. As an impressionable teen, he became entrenched in the graffiti art and break dance street culture in Germany. He was devastated when the family relocated to Iowa and said he fell into a deep depression.

In his isolation, he began doing graffiti art on Masonite board because he could not afford canvas. Over time, he got the attention of art teachers at the local community college and later the support of the city to do murals on dilapidated buildings and other structures. But one of the more interesting connections he made early on was an arts leader in Waterloo.

She loved his graffiti art and commissioned him to make two pieces for each of her teenage sons. He was paid $400 — a fortune at the time for him. One of her boys, Scott Scully, now lives in St. Louis. He is part owner of the building on Arsenal in which restaurateur Vito LaFata plans to open a casual Italian eatery called Cafe Piazza this summer. Formerly home to Benton Park Coffee Bar, it’s across Lemp from Gus’ Pretzels.

LaFata told Scully he wanted something visually unique in the restaurant to spur conversation and laid-back social gatherings — in the spirit of an old-school authentic Italian cafe. Scully introduced him to Rosic.

Rosic has spent the past 3 1/2 weeks on scaffolding spraying out his glossy vision of St. Louis history. The mural, about three-quarters done, is in the style of Andrea Pozzo’s Apotheosis of St. Ignatius. That series of trompe l’oeil frescoes, painted to “fool the eye” into thinking the work is three-dimensional, was done by Pozzo between 1688 and 1694.

Rosic’s mural relies heavily on columns to give the illusion dimensionality. Stand in the middle of the restaurant and the columns appear to rise skyward. Move toward one end of the room and the columns flatten out, but three Clydesdale horses appear to crash out from under an architectural arch.

Rosic’s mural focuses on five eras of St. Louis history. Each is marked by a random floating page from a book and enhanced by landmarks and portraits of key places and figures.

The book pages also are an ode to Michelangelo, Rosic said. In the front corner of the restaurant, Rosic has spray-painted a painstaking replica of the Libyan Sibyl, one of 12 prophets and sibyls Michelangelo included in the Sistine Chapel. The sibyl, labeled “Libica,” is holding an open book behind her shoulder.

Rosic said the pages floating on the ceiling were from the book. “Visitors can piece together the history” among iconic images of St. Louis places and people over time, he said.

But lest one think the artist is too classical and too prim, he said he also was inspired by one other St. Louis landmark: the graffiti-laden flood wall along the Mississippi River.